The chains around women’s freedom

It has come to my attention that when most activists speak about violence against women and women empowerment they hardly or never mention the patriarchal system which is still one of the most prominent societal norms in Zimbabwe. I find this very disappointing because the patriarchal system is deeply rooted in the causes of violence against women and girls and has been used for many centuries as a tool to put women ”back in their place” and to silence them against any resistance. We need to start drawing our attention towards putting an end to this system if we plan on winning the fight against gender-based violence.

Patriarchal systems have been described as “the world historical defeat of the female sex,” and as systems that “distribute power unequally between men and women to the detriment of women.” Patriarchy is therefore orchestrated by gendered roles whereby males are dominant and have authority over women. As a result women are oppressed and become powerless to rescue themselves from the risk of violence.

Looking at the typical Zimbabwean example; in a household, the father is the head of the house, the decision- maker and what he says goes. If the wife attempts to challenge him he silences her either emotionally abusing her with harsh degrading words or by physically abusing her by beating her up.  Another typical example is that the patriarchal system gives men the role of being a “breadwinner” and the women as being the one that does that day to day household duties including cleaning, taking care of the children and cooking. There are many households where because of the “breadwinning” role given to men, the father of the house prohibits the wife to get a job leaving the wife solely financially dependent on the husband resulting in the wife being in a vulnerable position because she has to ask the husband for everything including for money to buy her own underwear- mind you this is a form of economic abuse. My next example is more common in the rural areas where many people are living in extreme poverty, because of poverty a household is unable to send all the children to school, automatically the system disqualifies the girl child and favours the boy child to be the chosen one that goes to school without even considering both children’s intellectual capacity. The girl child is then seen as a burden and the father marries her off as a way of getting money via lobola and to also get rid of the “burden”- mind you this is child marriage and is a form of abuse towards young girls.

Believe me, I can go on and on with examples that you will find very familiar, because these are the things that have been normalised in our society, the same society that cries out for the violence against women and girls to end.  For many years society has acknowledged this dehumanizing tool called patriarchy and behaves as if men are entitled to treat women in a degrading manner. It’s a cycle that boys learn from the time they are born. Have you noticed the reactions from the extended family when a male child is born? Everyone is excited and some even start to call the male baby by the “mutupo,” this baby grows up being praised and even at times referred to as the head of the house from that age. We have normalised this system to the extent that even though we cry against the violence against women on one hand, on the other hand we teach our boys to dominate and maintain a “boys will be boys” mentality, whilst teaching our girls to tolerate male aggression or change their behaviour to avoid it. Boys then grow up feeling entitled to women such that they inflict violence on our bodies in order to assert themselves. Patriarchy is our major obstacle to free ourselves from the violence and the discrimination we face as women. GBV is entrenched in the strong patriarchal ideologies of control, subversion and subordination of women and girls and we have to start focusing on ending this system for us to be free. Enough is enough!! We have carried this burden for many centuries and like anything that has a beginning; it can also have an end. 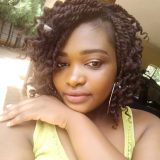 Obtained Bachelor of Social Science and Bachelor of Laws at Rhodes University in South Africa. Human Rights Lawyer with focus on Women's Law. Proud feminist who advocates for gender equality and against gender based violence.